History of the Athenaeum Club House 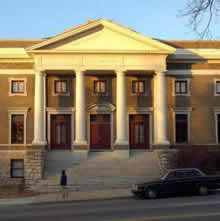 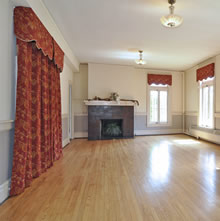 Video History of the Delta Athenaeum: Sisterhood, Suffrage, and Service

The origin of the Athenaeum dates to 1894, when 70 civic-minded women organized “The Kansas City Athenaeum Club” to meet in literary study groups and discuss public affairs.  By the turn of the century, the Club members became increasingly involved in the suffrage movement.  They were outspoken women who wanted to be heard in their community and nation.

When the membership grew to 500 women in the early 1900's, the Club began raising funds to establish the Athenaeum Club House as a gathering place for “literary learning” and community service. A greater urgency to build the Club House arose in 1907 when a fire suspiciously broke out in the Pepper Building as Club members gathered for their annual business meeting. The women ultimately raised $33,000 to purchase land and commission a grand three-story building in Greek Revival architectural style.  The cornerstone for the “Kansas City Athenaeum Clubhouse” was laid in 1913 at the corner of Linwood Boulevard and Campbell Street in the Hyde Park neighborhood.

The Athenaeum Club House opened in 1914 and became a central location for women's advocacy and empowerment. Membership grew to more than 1,000 members during the 1930's and 1940's.  For more than 100 years, Club members gathered at the facility to mobilize civic engagement and philanthropy for such initiatives as Truman Hospital, the Rose Garden at Loose Park, Children’s Mercy Hospital, street signage in Kansas City, kindergarten education, and daycare options for working mothers.  Public  schools in Kansas City are named in honor of two of the Athenaeum Club's most prolific leaders, Katharine B. Richardson and Mary Harmon Weeks.

The iconic Athenaeum Club House has been listed on the National Register of Historic Places since 1979.  As the oldest women's organization in Kansas City, the Athenaeum Club continued to own the building until recent years when its membership ranks dwindled.  In 2015, the Club sold the Athenaeum property to the DEED Foundation as a women’s organization with a shared commitment for charitable fundraising and community service.

The DEED Foundation renamed the building as the "Delta Athenaeum" to celebrate the history of its origin and the founding of DEED by members of Delta Sigma Theta Sorority, Inc.   The Athenaeum now serves as the home of the Kansas City Missouri Alumni Chapter of Delta Sigma Theta Sorority, Inc. and provides rental facilities for special events and commercial catering.